Bash’s simple approach to “Diversity and Inclusion” empowers audience members to uncover the humanity in each other – thereby creating a space where we not only welcome, but value each person’s unique perspective.

So long as we are fixated on needing certain external conditions in order to be happy, we will never be fully present or be able to serve our clients to our full potential. Bash offers practical steps on how to step into the present moment.

As Executive Producer and Host of the TV Series, Bridge the Gap, on PBS and the National Geographic Channel- Bash traverses the globe, discovering what it’s like to walk in someone else’s shoes. He pulls from real life experiences in nearly 40 countries to present us with a new way of looking at our world.

“We need more people like Chris in the world.”

Founder of the Jane Goodall Institute & UN Messenger of Peace 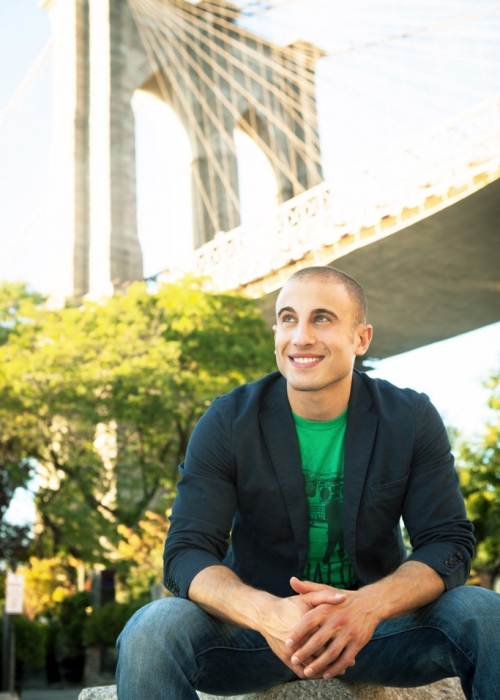 Chris Bashinelli, also known as, “Bash”, was born and raised in Brooklyn, New York. After a decade long acting career including an appearance on the HBO hit television show, The Sopranos, Bash decided to follow his real passion – using media to build bridges between cultures. In his early 20’s, he became one of the youngest Moderators at the United Nations and made a documentary about his journey to Tanzania. He now traverses the globe from Uganda to Haiti, as Host of Bridge the Gap, a television series featured on PBS and the National Geographic Channel, where he discovers what it’s like to walk in someone else’s shoes.

Of Lebanese and Italian descent, Bash knows what it takes to live in a diverse world. He has harvested buffalo with Native Americans in Pine Ridge, lived with nomads in Mongolia, and Sumo Wrestled the heaviest Japanese human being in recorded history. He is a United Nations Moderator, an Eagle Scout, a National Geographic Explorer, and has interviewed some of Time Magazine’s 100 Most Influential People on the Planet.

Bash has spoken around the world – from TEDx, to Abu Dhabi, to Azerbaijan – at multi-million dollar corporations, Ivy League Universities, and in the United Nations General Assembly Hall. He has shared the stage with Stevie Wonder, Dr. Jane Goodall and former United Nations Secretary General, Ban Ki-moon.

The idea for Bridge the Gap spawned in 2007. It was the dawn of the era of the mindless reality television program, the kind that not only breeds gossip and judgment, but also serves to divide human beings against each other. It was also a time of immense suffering for people throughout our world, though when is it not? After appearing on The Sopranos (HBO), Chris traveled to Tanzania to experience life in another part of the world firsthand. Inspired by the people he met in East Africa, Chris returned to the USA with one mission- to use media to bridge the immense inner and outer gaps between people and cultures.

“From Haiti to the Pine Ridge Indian Reservation in South Dakota, I have met countless individuals living in incredibly difficult external conditions who are often more content and inspired than people I know in far more “better off” conditions. The common thread many of these individuals share is their concern for others, often even above their own welfare. Through these experiences I am reminded that happiness is a state of mind, not a state of the external world. Perhaps by walking in other people’s shoes and gaining a glimpse into their experience, we can tap into a deeper wisdom that will inspire each of us to live more conscious lives and reach our full potential.”

“Chris’s motivational skills will inspire people to make this a better planet.”

Bash’s keynotes have been developed over his one-decade as a social entrepreneur, explorer and television host. He shares the formula he has used to moderate major events for the United Nations with no formal training… to executive producing a TV Show for PBS at 23 years old… to leading a National Geographic Expedition in Mongolia- where he lived as a nomad. His unique life path has brought him to nearly 40 countries, building bridges across cultures and gaining unprecedented insight into the universal human experience. Bash invites you to “Step Outside Your World” and embrace a unifying perspective!

Bash’s unique approach to “Global Citizenship” empowers attendees re-structure the way they view the world- beginning with themselves. Being a Global Citizen begins with believing in our own potential. By creating a strong foundation within ourselves, with our co-workers and on our stoop, we will then be able to create lasting change in the greater world. Bash encourages each of us to realize our full potential- thereby becoming inspired members of our families, our organizations and ultimately our world.

If you’re looking for a vanguard that will engage your audience and empower them to think differently about their lives and their relationships, then Bash is your speaker. He reminds us how important it is step outside of our comfort zones, be fearlessly honest and put others first. Whether he’s interviewing Dr. Jane Goodall for PBS or embarking on yet another jaw-dropping adventure in Mongolia, with humor and humility- he presents us with a new way of looking at our world.

Bash has been an Executive Producer and TV host since he was 20-years-old. He has attracted major sponsorships from corporations like Ben & Jerry’s Ice Cream, interviewed some of TIME Magazine’s 100 Most Influential People on the Planet, led a National Geographic Expedition in Mongolia and Sumo Wrestled the heaviest Japanese human being in recorded history. His work has been featured in acclaimed publications including Huffington Post, Delta Sky, American Way Magazine, Daily News Zimbabwe and Lonely Planet. He is the youngest male ever to moderate the United Nations International Day of Peace. He has an official day named after him in Montgomery, Alabama for his work with the Boy Scouts of America. His favorite song is “Layla”, the acoustic version, by Eric Clapton.

For a list of Keynotes visit the Keynotes Page

“Chris is one of the most inspiring new voices on TV. He’s part Anthony Bourdain, part Anderson Cooper and 100% fresh.”

For socially conscious members of the modern world, Chris Bashinelli- the Cross-Cultural-Explorer, takes us on an introspective adventure- walking in the shoes of people halfway around the world and encouraging us to think differently about our lives. Bash is a relatable everyman- who forged his own unique path in life. He’s a Kid from Brooklyn, New York who gave up an acting career (The Sopranos, HBO), to follow his real passion- using media to bridge intercultural gaps worldwide. Whether he’s speaking on stage with Stevie Wonder, interviewing Dr. Jane Goodall for PBS, or living as a nomad in Mongolia, Bash keeps us engaged, entertained, and inspires compassion for “the other”